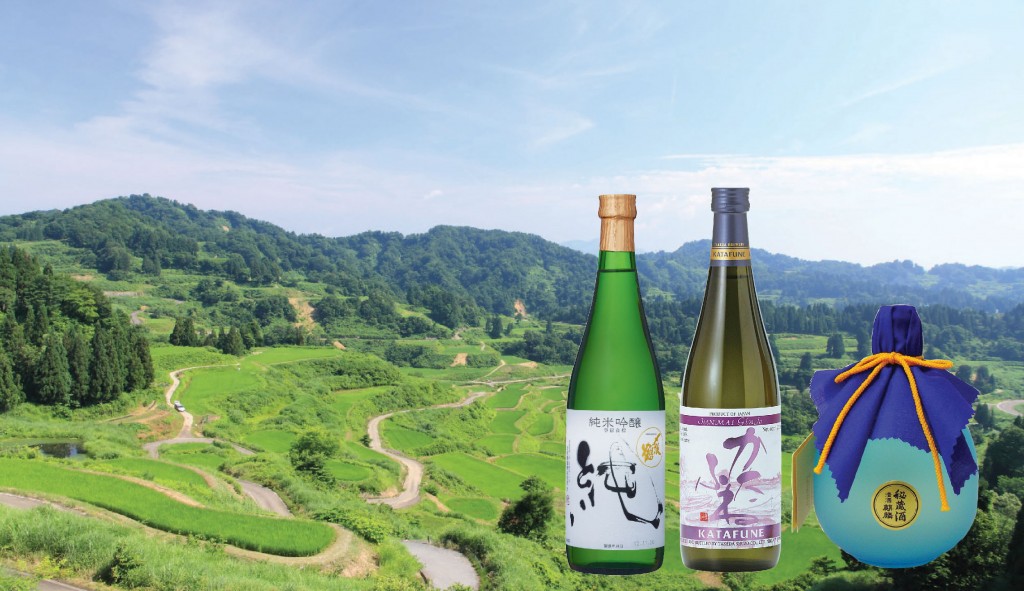 Sake of the Niigata Prefecture origin are characteristically known for their tanrei karakuchi or light/dry-crisp flavors. This genre of Tanrei Karakuchi and Ginjo style Sake created quite a stir when in the 90’s, as Umakuchi or Umami-packed Sake had been the industry norm. However, this “revolution” spearheaded by the dedicated and highly skilled Echigo Toji, became the catalyst to spark the Jizake boom, uplifting all breweries across Japan which were dwindling at the time.

Niigata Prefecture is a long stretch of land extending along the Sea of Japan, with high mountain ranges as backbone to its east. And in between are the Echigo plains, producing the largest volume of rice, in particular, the premium Koshihikari rice. Niigata is also one of the top producers of Sake housing nearly 100 breweries, second only to Hyogo Prefecture. Many are small-scale, local breweries clustered in the alluvial areas in Muika and Yuzawa, costal sand dunes of Kashizawa, and the Nagaoka areas.

In Niigata, nature’s gift of heavy rain and snow as well as the cold winters’ climate, creates the perfect condition for low temperature and long fermentation. And the abundant soft water produced by snowmelt is highly suitable for brewing the light and soft mouth-feel Sake that the region’s well known for. And finally, Gohyakumangoku, the Shuzo Kotekimai Sake rice developed there specifically for Sake brewing, yields a plentiful harvest each year.

The enormous success of Niigata’s Tanrei Karakuchi Sake has carried over to the US, where now, they’ve become permanent fixtures at most Japanese restaurants. Among these Niigata brews, there’s yet been another evolutionary trend, one toward deeper and bolder flavors. These offer the Acharacteristics especially suitable for a Hidden Sake Menu listing.

Among Sake aficionados, Shimeharitsuru Jun Junmai Ginjo is regarded as the epitome of tanrei umakuchi or light and tasty Sake. Established in 1819, the brewery was founded in a village known for local production of Gokyakumangoku and Takanenishiki rice, and where the soft water used for brewing is pulled from a well in the same village. The pristine ground water flows from the riverbed of Miomote River producing the delicate and sweet water for Sake, which also attracts salmon run fans during the seasons. It’s in this geographically blessed region, unchanged through time, where Toji’s continue to pass down their unwavering art of Sake brewing and where Kurabito’s endure their steadfast dedication to quality brewing.

Shimeharitsuru Jun Junmai Ginjo
This elegant Sake is characteristically mellow with a smooth mouth-feel, a subtle sweetness that expands and fades quickly.

Kirin Hizoshu is brewed by Kaetsu Shuzo, their brew named after the Kirin Castle built during the Kamakura period (1185–1333) in the town of Tsugawa. The brewery, established in 1880, is uniquely connected and seriously dedicated to the preservation of the Sake tradition. Two generations of the Sato family, Chairman Heihachi Sato and the current president Shunichi Sato (both doctors of agriculture), have served as official Sake appraisers for the National Tax Agency. Their cumulative knowledge from their Sake appraiser experience is applied throughout the brewing process, quite distinctive in its use of technology in brewing traditional sake. Situated in the junction of the mighty Agano river, flowing from Oze and Iwanashiro Lake, and the Tsunenami River, the brewery is surrounded by fog throughout the year, creating a humid climate that boosts the growth of beneficial bacteria for the optimum environment to ferment Nigori Sake.

Kirin Hizoshu Daiginjo
Daiginjo Sake brewed specifically for Sake appraisal is stored and aged for 5 years in low temperature (32ºF). Highly aromatic like Sherry, but with a delicate flavor that highlights a mellow-Umami flavor.

Takeda Shuzo’s Katafune Junmai Ginjo features a full-bodied, Umami-packed flavor with a rounded mouth-feel. The secret to its perfect balance of gomi or the five basic flavors, can be traced to the water used for brewing the Sake. The strong current of coastline water helps Sake fermentation and stabilizes the brewing process, however, it’s a delicate balance for it can also interfere the Umami flavors from being properly drawn out from the rice. This brewery’s greatest strengths are in their ability to control the moromi closely which determines the fermentation strength of the yeast, and in making Koji that can stand up to the yeast’s vigorous fermentation. The Katafune name originates back to the Tokugawa period (1603–1867) when the brewery was established, reflecting the region’s scenery of fishing boats dotting the sand dunes.

Brewers who craft their Sake grew up eating these local cuisines, over time developing their palates to what suits best, and leading to the Sake flavor that they now brew. Below lists some of Niigata’s local foods that offer the best pairings with Niigata Sake.